Skin rashes most certainly occur in the setting of Sjögren’s. As opposed to many of the other autoimmune skin rashes that I see in my autoimmune dermatology clinic, there are no rashes that are specific for Sjögren’s. In other words, I cannot look at a rash in a Sjögren’s patient and immediately tell them that they have Sjögren’s. In comparison, I can often look at a lupus rash and tell the patient they have underlying lupus. That being said, Sjögren’s patients exhibit a variety of skin rashes that are important to recognize and know when to see a board-certified dermatologist.

By and far the most common skin conditions associated with Sjögren’s are xerosis, or clinically dry skin, and eczematous dermatitis. These are caused primarily by barrier dysfunction of the skin. Gentle skin care practices and liberal moisturizers are the best way to prevent these common skin eruptions. When caring for your skin you should take no more than one short, lukewarm shower per day. You should remain in the shower for less than 10 minutes. Soaps like Dove sensitive and VanicreamTM, can be utilized as they will not strip your skin. If a wash cloth is used while bathing, it should be limited to areas that give off body odor like the armpits, genital, and buttock areas, in order to not disrupt the skin barrier. Immediately after getting out of the shower, you should pat dry and then apply a moisturizer. Ointments are the best moisturizers followed by creams. Lotions are not typically moisturizing enough for patients with Sjögren’s. The best ointments are Vaseline® or Aquaphor®. If an ointment is too greasy for your taste, cream moisturizers like CeraVe®, VanicreamTM, Eucerin®, or Aveeno®can be used. For itchy skin, Sarna Original lotion can give immediate relief especially when stored in the refrigerator. If scaly, dry skin is present, utilizing moisturizers with lactic acid, urea, or salicylic acid can be used. Examples include: AmLactin®, CeraVe® SA, and Eucerin® Roughness Relief. If your rash is not responding to moisturizers and gentle skin care practices, a prescription corticosteroid cream or a steroid-sparing anti-inflammatory cream may need to be prescribed by your physician.

If you develop a purple-to-red rash that does not lighten, or blanch, with pressure, ulcerations of the skin, or a purple net pattern on your skin, this should prompt you to see a dermatologist for evaluation. Rashes that are associated with purpura (blood spots) can represent vasculitis, an inflammation of the blood vessels. Although these rashes are not as common as the ones discussed above, they are important to recognize in Sjögren’s patients and should be seen quickly by a dermatologist.

Most women will conceive and have healthy babies. However, there are potential complications. Consulting your obstetrician (OB-GYN), rheumatologist, and possibly a high-risk OB (perinatologist) prior to conceiving or early in pregnancy is suggested. 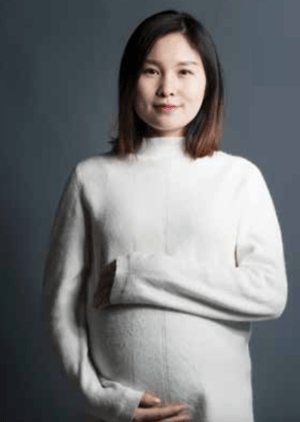 Factors contributing to the ability to conceive:

This article was first printed in The Moisture Seekers, SSF's patient newsletter for members. It is also available as an SSF Patient Education Sheet.

Q. “I am starting to experience hair loss. Can this be connected with my Sjögren’s and what can I do about it?”

A. Hair loss can be caused by a number of conditions including hormonal or genetic causes, medications, inflammatory conditions of the scalp, autoimmune disorders, or shedding of the hair that can occur after a change in health status. Patients with Sjögren’s can have hair loss, but their underlying Sjögren’s is not always to blame. A thorough history and physical exam by a dermatologist can help to elucidate the underlying cause of the patient’s hair loss and will guide treatment.

As Sjögren’s patients often have a concurrent autoimmune disorder it is important to confirm entities like cutaneous or systemic lupus are not the cause of the hair loss. Control of the underlying autoimmune disease is the priority in this case to improve the hair loss. If cutaneous lupus is present, topical medications, injectable medications, and sometimes-internal medications are needed. Significant illness or major life events, which can affect Sjögren’s patients, can produce a shedding of the hair called telogen effluvium that fortunately is self-resolving. Androgenetic alopecia, a type of hair loss that can be caused by genetic or hormonal factors, and is not related to Sjögren’s, can begin with a widening of the midline part of the hair. Topical minoxidil (Rogaine) 5% foam or solution is usually the first line treatment.

As a number of other conditions can also produce hair loss, I would encourage you to see your dermatologist to diagnose your type of hair loss and formulate a treatment plan.

This article was first printed in The Moisture Seekers, SSF's patient newsletter for members.

Sjögren’s Top 5: What Your Rheumatologist Should be Monitoring For

Patients with Sjögren’s usually see their autoimmune treating physician several times a year. Mostly, they are rheumatologists, but can also be primary physicians, internists or subspecialists such as interested pulmonary or hematology doctors. In addition to taking a history, performing a physical examination, or drawing blood tests, are there things that should be specifically looked at or monitored for? This article reviews the top five items.

1. Is there evidence for extraglandular Sjögren’s?

Some people with extraglandular Sjögren’s may have interstitial lung disease, renal tubular acidosis, swollen lymph glands, or inflammatory scarring of the bile ducts (biliary cirrhosis). Being identified with extraglandular Sjögren’s usually warrants systemic immune suppressive therapy with agents such as azathioprine, methotrexate, cyclophosphamide or rituximab. The treating physician should use their tools to screen for the spread of Sjögren’s to new areas with imaging or laboratory testing, which allows one to be proactive and treat the disease early.

Over a 15-20 year period of observation, 8-15% of Sjögren’s patients develop a lymphoma. Screening for symptoms of early lymphoma include asking a patient about swollen glands, fevers, weight loss and new onset of fatigue. A physical examination can detect lymph nodes, evidence for a “wasted” appearance, or an enlarged spleen. I perform a serum protein electrophoresis (a $30 blood test) on my Sjögren’s patients every 6 months. Often, early lymphomas can be detected with the development of an extra protein on this determination, which is known as a “MGUS” or monoclonal gammopathy of uncertain significance. Most Sjögren’s associated lymphomas are of a specific variety known as “MALT” that, if identified early, responds well to treatment.

Sjögren’s patients can have features of other autoimmune conditions such as rheumatoid arthritis, inflammatory myositis, biliary cirrhosis, scleroderma, Hashimoto’s thyroiditis or lupus, while still being “mostly” Sjögren’s. These features may warrant certain anti-inflammatory interventions. This would include corticosteroids for inflamed muscles, drugs that promote more oxygen to dilate the vessels of the hands for individuals with Raynaud’s (often seen with scleroderma or lupus), approaches that halt the development of erosions (bone destruction) with rheumatoid arthritis (e.g., anti-TNFs), ursodiol for biliary cirrhosis, antimalarials for subacute cutaneous lupus rashes in anti-SSA positive patients or thyroid. Identification of a secondary autoimmune overlap can often explain symptoms that may be profound but are not a part of Sjögren’s.

4. Don’t unnecessarily treat Sjögren’s for symptoms that are not related 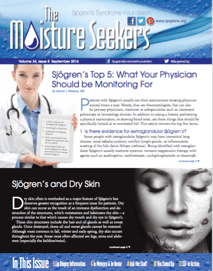 Sjögren’s patients may have high blood pressure, depression and diabetes, as does 25% of the United States. Medications given for these conditions can make dry eye or dry mouth symptoms more severe. Treating such patients with anti-inflammatory medications or diuretics (water pills) is not advisable. Before altering one’s Sjögren’s medications or their environment, the physician should strive to rule out co-morbidities or co-existing circumstances that may seemingly worsen Sjögren’s symptoms.

5. Screening for head and neck emergencies or ares associated with non-extraglandular Sjögren’s

Patients with Sjögren’s whose disease is confined to the salivary glands, eye, head and neck areas occasionally develop complications, which may mandate emergent treatment. These include acute inflammation of the parotid gland (parotitis, or Mikulicz’s syndrome, with either a stone or focus of inflammation, treated with corticosteroids), corneal ulcerations, blocked salivary ducts (affecting the mouth), and dental caries or abscesses. Most Sjögren’s patients see a dentist 2-3 times a year to get their teeth cleaned, and are often frequent return visitors to their otolaryngologist (ENT doctor).

In summary, screening for the five features reviewed above, can prevent or promote early treatment of the overwhelming complications with Sjögren’s.

Ask the Doctor: Sjogren’s and the Benefits of Vitamin D

Q. I keep reading about the use of vitamin D with autoimmune diseases. How important is it for Sjögren’s patients?

A. Vitamin D is important in bone and cartilage homeostasis. New evidence indicates that vitamin D may have extraskeletal benefits on several systems including the immune system. Autoimmune diseases such as systemic lupus (SLE), and Sjögren’s have been associated in a few studies with low vitamin D levels. However, the significance of low vitamin D levels in disease pathogenesis and prevention is unclear.

What are the sources of vitamin D? Vitamin D has two precursors, Vitamin D2 (ergocalciferol) and Vitamin D3 (cholecalciferol). Vitamin D3 is synthesized mainly in the skin by the action of ultraviolet light. Vitamins D2 and D3 are found in very few dietary sources, such as fish oils or fortified dairy products, as well as supplements.

Recommendations regarding desirable levels are based upon evidence related to bone health. Some controversy exists, but experts such as the International Osteoporosis Foundation suggest that a minimum level of 30 ng/mL is necessary to decrease the risk of falls and fracture.

In Sjögren’s, few small trials have been performed to assess the prevalence of low vitamin D levels and the association with disease severity. No conclusive data has been assembled to indicate that subjects with Sjögren’s have lower vitamin D levels than healthy subjects, or to suggest a pathogenic relationship between lack of vitamin D and development of disease.

Patients with Sjögren’s can be prone to vitamin D deficiency. Photosensitivity, where exposure to ultraviolet light triggers a rash is prevented by avoiding exposure to sunlight, could contribute to lower levels of vitamin D. Furthermore, certain medications may aggravate vitamin D deficiency. Chronic corticosteroid and hydroxychloroquine use are suspected to affect vitamin D concentration and activity respectively.

In summary, although there are no guidelines regarding optimal vitamin D levels for extraskeletal and immune system health, it would be reasonable to recommend that patients be screened for vitamin D deficiency and treated with supplementation. The American College of Rheumatology recommends a daily intake of 800–1000 IU per day of vitamin D in patients on treatment with steroids.

This information was first printed in the The Moisture Seeker, SSF's patient newsletter for members.