Ask the Expert:
“How can I manage my vasculitis so that it doesn’t become too severe?”

Vasculitis usually manifests with purplish skin lesions on the legs and sometimes the trunk. It is usually associated with high levels of gammaglobulin in the serum. The skin may become easily irritated and even break down in areas where numerous lesions develop. The skin around the ankles is most susceptible. Skin break-down and ulcerations may form.

Although severe vasculitis from Sjögren’s may require hydroxychloroquine (Plaquenil), oral corticosteroids and immunosuppressive medications, milder forms can be managed with simple conservative measures.

Skin breakdown occurs with greater frequency when there is fluid accumulation around the ankles so measures that minimize edema (excess fluid accumulation) in the legs can be helpful. Such measures include elevation of the legs and the use of support hose. When sitting, your legs should be propped up on a chair and not left dangling for too long. Support hose to control edema should be of the above-knee variety. Hose that bunch up below the knee may actually act like a tourniquet and impede blood flow in the legs making edema worse.

Mild trauma to the skin of the legs can also favor skin ulceration so wearing pants may provide an extra layer of protection. Edema can also be controlled with diuretics. Some patients with vasculitis may benefit from low dose aspirin to keep the blood vessels open.

Of course these conservative measures should also be applied in instances when immunosuppressive therapy is needed. Consult with your doctor if diuretic therapy or low dose aspirin is right for you.

Ask the Expert: Plaquenil and Sjögren’s

What is Plaquenil and what are its benefits for Sjögren’s patients?

Plaquenil (hydroxychloroquine) is a medication that has been used for many years to help musculoskeletal symptoms and fatigue in patients with autoimmune conditions such as rheumatoid arthritis, lupus and Sjögren’s. While there is good clinical evidence demonstrating the drug’s efficacy in rheumatoid arthritis and lupus, there are very few studies looking at hydroxychloroquine as a treatment for Sjögren’s. The studies that do exist show mixed results (some show benefit and some show no benefit) in whether or not the drug is effective in helping with pain, fatigue, dry eyes or dry mouth.

Nonetheless, despite the lack of clinical studies, rheumatologists feel that hydroxychloroquine may have a potential beneficial effect in helping patients with symptoms of fatigue and achiness, which are common complaints in patients with Sjögren’s. 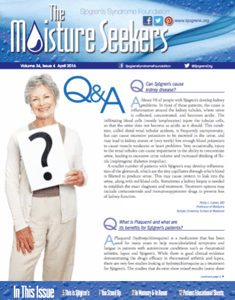 How the drug works is unclear, but recent research has pointed to an inhibitory effect on toll-like receptors that are proteins involved with inflammation. The good news is that hydroxychloroquine targets the immune system without causing an increase in the risk of infection or cancer that can be seen with other immunosuppressant medications. The typical dose for hydroxychloroquine is 200-400mg per day and is based on a person’s body weight (or if you are overweight, your ideal body weight). While hydroxychloroquine is considered a relatively safe medication, like all medications there are potential risks. These include body rashes that often will itch. The rash typically occurs in the first 6 weeks and is usually mild. In general, the rash will resolve within 2 weeks after stopping the drug. A more severe rash affecting larger areas of the body may occur but is not common. If this type of rash occurs, other medications such as anti-histamines and steroids may be required to help with symptoms.

Over time, hydroxychloroquine may uncommonly have an adverse effect on the retina that can lead to permanent visual damage if not picked up early. In order to protect the eyes, a baseline exam is recommended be- fore starting the drug if you are color blind, have prior retinal problems or have never had a dilated exam (checking color vision is one way the doctor monitors for early damage) or within the first 6-12 months if you have a history of healthy eyes and a recent retinal examination. After the baseline exam, it is recommended that patients get a dilated exam at the minimum of once per year. Retinal problems are more likely to occur after 5 years of use. Newer technologies are available (OCT-optical coherence tomography) that can pick up early changes. If early changes are found on exam, it would be uncommon to have progression of eye toxicity or visual changes.

Other potential side effects include but are not limited to nausea, changes in mood, muscle weakness, skin pigmentation and anemia. While the drug may be used during pregnancy, the potential benefits and risks should be discussed with your doctor.

In summary, if you have Sjögren’s, hydroxychloroquine may be an option to help your symptoms. Because there are other more effective therapies available to treat dry eyes and dry mouth, it is typically prescribed to help musculoskeletal pain and fatigue. Be patient, as the drug may take up to 6 months to see a beneficial effect.

This information was first printed in The Moisture Seeker, SSF's patient
newsletter for members.

Ask the Doctor: What's an Immunosuppressant?

A. There isn’t a universally accepted definition of an immunosuppressant medication. In general, I think most providers would agree that a medication that has been shown to potentially increase the risk for infections in long- term studies would be considered an immunosuppressant. It is important to note that many, if not most, patients with Sjögren’s do not need or benefit from immunosuppression. 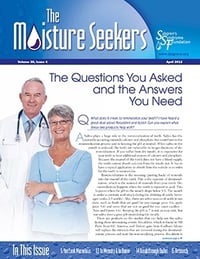 For certain patients, however, they can be very helpful. The most common immunosuppressant medications used for Sjögren’s include methotrexate, azathioprine (Imuran), mycophenolate (Cellcept), cyclophosphomide (Cytoxan), and biologic agents, such as rituximab (Rituxan). These are also used for many other related autoimmune diseases, and the effect of each medication on the immune system varies from blocking inflammation pathways to directly affecting white blood cells.

There is a common goal for all immunosuppressants: to put the disease into remission, or at the very least reduce the severity or frequency of symptoms and allow patients to avoid steroids. As with all medical treatments, the hope is that the benefits outweigh the risks. If not, then the dose is typically decreased or the medication is stopped completely. With the exception of certain cases, immunosuppressives are generally used to help provide symptomatic relief and not necessarily to prevent something bad from happening. So if an immunosuppressive is tried but doesn’t help after an adequate amount of time, it is usually stopped.

Hydroxychloroquine (Plaquenil®), a medication often taken by Sjögren’s patients, is not generally considered an “immunosuppressant.” While it does change or “modulate” the immune system in various ways, it does not lead to an increased risk of infections and does not require lab monitoring.

This information was first printed in The Moisture Seeker, SSF's patient
newsletter for members.

The Risk of Retinal Toxicity with Plaquenil

Plaquenil, hydroxychloroquine (HCQ), is an anti-malarial medication that has been proven to be useful in the treatment of patients with rheumatoid arthritis (RA), systemic lupus erythematosus (SLE) and other inflammatory and autoimmune diseases. In Sjögren’s, Plaquenil is used to treat many symptoms of Sjögren’s including fatigue, joint symptoms of arthritis and arthralgias (joint pain), dry mouth and dry eyes. Similar to its use in systemic lupus erythematosus, many clinicians feel that it is useful in reducing general Sjögren’s “disease activity.”

One of the reasons that physicians feel comfortable in prescribing Plaquenil is its low risk to benefit ratio. This means that the side effects of Plaquenil are mild and infrequent compared with its potential benefits. As with any medication, allergic reactions including skin rashes and non-allergic reactions can occur. The side effect that is of greatest concern is retinal toxicity.

Retinal toxicity of Plaquenil may manifest itself with subtle disturbances of the retinal pigment epithelium which may eventually lead to complete destruction of the macula in the form of bull’s-eye maculopathy.

Several risk factors may increase the likelihood of retinal toxicity from Plaquenil such as, age of greater than 60 years, daily dose more than 6.5 mg/kg; use of the drug more than 5 years, obesity, preexisting retinal disease and, renal or liver failure. Early detection of the maculopathy is of critical importance to discontinue Plaquenil in order to stop or slow retinal damage. Unfortunately, clinically evident early structural changes can be subtle and usually preceded by abnormalities in functional tests such as visual field examination, multifocal electroretinography (mfERG), fundus autofluorescence (FA) imaging, and optical coherence tomography.

Recent findings suggest that Plaquenil toxicity can develop among patients that are taking the drug at a daily dose lower than the suggested “safe” dose and/or have been on Plaquenil for shorter than five years. Unfortunately, cessation of Plaquenil intake may not be a remedy since not infrequently, patients will develop objective evidence of progression despite discontinuation of the drug. Thus, the possibility of toxicity should not be disregarded and close monitoring of the ocular findings is required.

As a precaution, patients treated with Plaquenil are advised to get a baseline eye exam prior to starting the drug and then annually thereafter

This information provided by Neil I. Stahl, MD & Tongalp H. Tezel, MD was first printed in the The Moisture Seeker, SSF's patient newsletter for members.