Our Top 5 Tips for Raynaud's

Raynaud’s Syndrome occurs in approximately 38% of patients with Sjögren’s.

Raynaud’s Syndrome (sometimes called Raynaud’s phenomenon) is defined as repeated episodes of color changes in the fingers and/or toes with exposure to cold temperatures or during episodes of emotional stress. The color changes are due to a spasm of the blood vessels that feed the fingers and toes. The digits typically turn very white, then can take on a bluish color with prolonged exposure to the cold, and finally can turn very red as blood flow resumes. 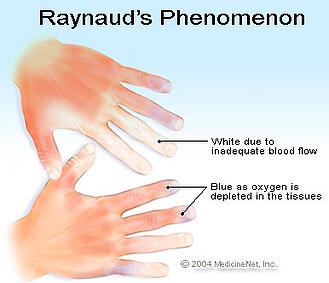 These Tips are from the SSF Patient Education Sheet: Raynaud's Syndrome- Click here to view the full sheet

Click Here to see all of the SSF Patient Education Sheets

Sjögren’s Top 5: What Your Rheumatologist Should be Monitoring For

Patients with Sjögren’s usually see their autoimmune treating physician several times a year. Mostly, they are rheumatologists, but can also be primary physicians, internists or subspecialists such as interested pulmonary or hematology doctors. In addition to taking a history, performing a physical examination, or drawing blood tests, are there things that should be specifically looked at or monitored for? This article reviews the top five items.

1. Is there evidence for extraglandular Sjögren’s?

Some people with extraglandular Sjögren’s may have interstitial lung disease, renal tubular acidosis, swollen lymph glands, or inflammatory scarring of the bile ducts (biliary cirrhosis). Being identified with extraglandular Sjögren’s usually warrants systemic immune suppressive therapy with agents such as azathioprine, methotrexate, cyclophosphamide or rituximab. The treating physician should use their tools to screen for the spread of Sjögren’s to new areas with imaging or laboratory testing, which allows one to be proactive and treat the disease early.

Over a 15-20 year period of observation, 8-15% of Sjögren’s patients develop a lymphoma. Screening for symptoms of early lymphoma include asking a patient about swollen glands, fevers, weight loss and new onset of fatigue. A physical examination can detect lymph nodes, evidence for a “wasted” appearance, or an enlarged spleen. I perform a serum protein electrophoresis (a $30 blood test) on my Sjögren’s patients every 6 months. Often, early lymphomas can be detected with the development of an extra protein on this determination, which is known as a “MGUS” or monoclonal gammopathy of uncertain significance. Most Sjögren’s associated lymphomas are of a specific variety known as “MALT” that, if identified early, responds well to treatment.

Sjögren’s patients can have features of other autoimmune conditions such as rheumatoid arthritis, inflammatory myositis, biliary cirrhosis, scleroderma, Hashimoto’s thyroiditis or lupus, while still being “mostly” Sjögren’s. These features may warrant certain anti-inflammatory interventions. This would include corticosteroids for inflamed muscles, drugs that promote more oxygen to dilate the vessels of the hands for individuals with Raynaud’s (often seen with scleroderma or lupus), approaches that halt the development of erosions (bone destruction) with rheumatoid arthritis (e.g., anti-TNFs), ursodiol for biliary cirrhosis, antimalarials for subacute cutaneous lupus rashes in anti-SSA positive patients or thyroid. Identification of a secondary autoimmune overlap can often explain symptoms that may be profound but are not a part of Sjögren’s.

4. Don’t unnecessarily treat Sjögren’s for symptoms that are not related

Sjögren’s patients may have high blood pressure, depression and diabetes, as does 25% of the United States. Medications given for these conditions can make dry eye or dry mouth symptoms more severe. Treating such patients with anti-inflammatory medications or diuretics (water pills) is not advisable. Before altering one’s Sjögren’s medications or their environment, the physician should strive to rule out co-morbidities or co-existing circumstances that may seemingly worsen Sjögren’s symptoms.

5. Screening for head and neck emergencies or ares associated with non-extraglandular Sjögren’s

Patients with Sjögren’s whose disease is confined to the salivary glands, eye, head and neck areas occasionally develop complications, which may mandate emergent treatment. These include acute inflammation of the parotid gland (parotitis, or Mikulicz’s syndrome, with either a stone or focus of inflammation, treated with corticosteroids), corneal ulcerations, blocked salivary ducts (affecting the mouth), and dental caries or abscesses. Most Sjögren’s patients see a dentist 2-3 times a year to get their teeth cleaned, and are often frequent return visitors to their otolaryngologist (ENT doctor).

In summary, screening for the five features reviewed above, can prevent or promote early treatment of the overwhelming complications with Sjögren’s.

Raynaud’s phenomenon describes a condition where the digits of the hands as well as the feet undergo a change in color often accompanied by pain, numbness and/or tingling.

Raynaud’s is often classified as either primary (Raynaud’s disease) or secondary (Raynaud’s phenomenon). Primary Raynaud’s occurs in the absence of any other associated disorder whereas secondary Raynaud’s occurs in the setting of autoimmune connective tissue disorders (CTD), most often systemic lupus erythematosus (SLE) and scleroderma although it can be associated with any CTD including Sjögren’s. Primary Raynaud’s occurs most often in women between the ages of 15-30. There is often a family history of Raynaud’s. Raynaud’s is caused by constriction of small blood vessels in the fingers, toes and occasionally other sites including the tip of the nose and the ears. This is also known as vasospasm. 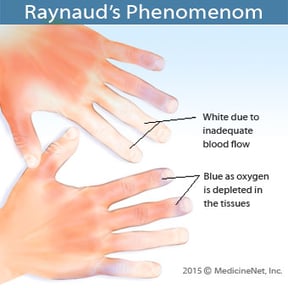 Raynaud’s most often occurs in discrete episodes triggered most often by exposure to the cold but also by emotion (fear, anger, excitement) and by certain pharmacologic agents including nicotine and certain medications. Raynaud’s is most often reversible; when the inciting stimulus is removed, the episode resolves. Clinicians classically refer to Raynaud’s episodes as “tri-phasic”. This means that the color change proceeds in 3 distinct phases – white, which represents pallor of the digits when blood flow is reduced secondary to the vasospasm; blue/purple, when the blood pools in the veins, and red, where blood flow is temporarily enhanced at the conclusion of the episode. In addition to the association with autoimmune CTD, secondary Raynaud’s can rarely be associated with sludging of blood in capillaries caused by high protein levels seen in hematologic disorders as well as by vascular diseases such as atherosclerosis. Thus, when evaluating a patient presenting with possible Raynaud’s, the clinician needs to distinguish primary from secondary Raynaud’s. This mainly involves determining whether or not the patient has an autoimmune CTD by clinical exam and lab testing. In addition, a simple test where the capillaries of the nail beds of the fingers are examined using a hand held illuminated magnifying lens is often performed. The finding of irregular, dilated nailbed capillaries is strongly suggestive of an underlying CTD.

Since the vast majority of Raynaud’s episodes are triggered by cold exposure, mitigating the effects of reduced temperatures is a very important component of Raynaud’s management. It is important to realize that a significant portion of Raynaud’s pathogenesis is a reflex involving sympathetic nervous system control of blood vessel contraction. Thus, once the cold-induced reflex occurs, the episode will progress. Therefore prevention of this cold-induced reflex is extremely important especially in colder climates or as cold weather approaches. Patients are advised to dress warmly especially regarding the extremities. Mittens are felt to be superior to gloves since they encourage contact warmth between the digits. Gloves/mittens designed for skiers contain chemical or electric heating elements and may be helpful for certain patients. Emphasis should be placed on donning cold-weather gear prior to leaving the home. It is felt that lowering of core body temperature plays a role in triggering Raynaud’s episodes. Therefore, cold-weather clothing should minimize heat loss and include hats, scarves woolen face masks, and the use of layers.

Since Raynaud’s episodes are reversible, return to a warm environment usually results in resolution of the episode. If a digit remains painful or is persistently pale or blue, then immediate medical attention should be sought. When episodes are frequent or prolonged, pharmacologic therapy should be used. Medications used to treat Raynaud’s include those that dilate blood vessels and such as drugs used to treat hypertension (calcium channel blockers, ACE inhibitors and angiotensin receptor blockers). Pulmonary hypertension medications including sildenafil (Viagra; Revatio) can also be helpful.